Australia Burns as the Political Debate Continues to Rage

Australia Burns as the Political Debate Continues to Rage

After leaving the relatively benign temperate climate of New Zealand, I recently arrived to the Northern Rivers area of Northern NSW. Flying into the Gold Coast airport the pilot announced to the passengers on board, “what you are seeing below is not cloud it is the smoke haze from the recent fires gripping NSW.” Just hours earlier after leaving the green and lush landscape of New Zealand it became apparent, Australia is at the coal face, no pun intended, of the climate crisis.

Since arriving in Australia the bushfire threat has become worse. Numerous fires have devastated communities and over a million hectares has been burnt out, as a consequence there have been numerous fatalities. Former senior fire chiefs from New South Wales, Queensland, Victoria and Tasmania, all individually with over 40 years’ experience, band together in a press conference to emphasise how the climate crisis was making bushfires deadlier, more volatile and increasing the length of the bushfire season.  Greg Mullins the former chief of NSW Fire and Rescue said, “climate change has supercharged the bushfire problem.” All fire chiefs believe bushfires are a symptom of climate change and are extremely concerned this threat is going to get increasingly worse over time.

Is this the New Normal?

Northern NSW is usually a lush subtropical environment receiving an average annual rainfall ranging between 1500 – 2000mm, some of the best rainfall in Australia. On a recent tour of the region I experienced first-hand the parched landscape of Northern NSW. Barren, dry and hostile would be the words best to describe the normally green landscape. Whether this is an abnormally rare event, or a sign of things to come, it is concerning and currently causing much suffering and frustration for many communities as they enter unchartered territory and face increasingly stringent water challenges and restrictions.

It is important to remember that the bush fire season for New South Wales has started months earlier than any long term averages, while Queensland is also experiencing abnormal fires due to the excessively dry conditions.  The chief executive of the Australasian Fire and Emergency Service Authorities Council, Stuart Ellis, has expressed concerns about the welfare of fire fighters and other emergency response units due to fatigue and pressure being brought about by the increase in bushfire season and extensive spread of geographical area the fires are now encompassing. It will be interesting to observe how the coming months unfold,  any increase in intensity and severity of fires will place further pressure on political leaders and other groups to acknowledge and take action and respond to the climate emergency. 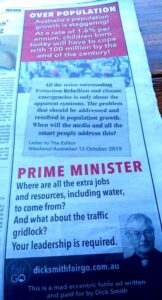 Mainstream media has been awash with political rhetoric and mudslinging from both sides of the political divide, over the causes of the fires, who’s to blame and the ‘unprecedented’ nature of these events.  Due to the complexity of systems, scientists agree it is hard to pinpoint and blame climate change for any one event. What the scientists have predicted for Australia is a longer and more intense bushfire season with more extreme drought events, all of which are playing out right now. While scientists agree that climate change has produced a long-term trend in increased and more extreme bushfire conditions, it seems the politicians in Australia are reluctant to address the issue.  Politicians are ducking for cover from protesters, experts and citizens who are expressing anger and frustration from the lack of action and leadership demonstrated by the coalition government. Instead, our political leaders are suggesting we postpone any conversation around these tragedies in respect for the lives lost during these events.

Joining the chorus of activists pushing for change is Dick Smith, the well-known entrepreneur, adventurer, philanthropist and environmentalist. Last week Smith ran a half page advertisement in the Sydney Morning Herald, outlining, all the noise surrounding the Extinction Rebellion and the climate emergency is about the apparent symptoms. His self-funded advertisement pleads to the Prime Minister to consider looking at the broader issues which are, and will, increasingly impact Australians. Dick understands the fragility of the Australian landscape better than most. He sees the stresses of over population and the mantra of growth at all costs as fundamental issues which will create economic, social and environmental stresses for Australians into the future if they are not managed appropriately.  In his brief but lucid advertisement he questions where the extra water, resources and employment will come from as populations increase.

"If we pollute the air, water and soil that keep us alive and well, and destroy the biodiversity that allows natural systems to function, no amount of money will save us." 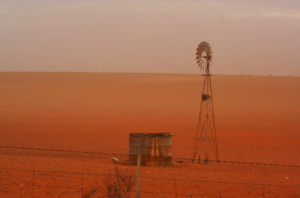 Australia is already one of the most vulnerable countries on earth, with most of its soils being billions of years old. Over time the soils of Australia have become leached of their nutrients by millennia of weathering. Soils in Australia have the lowest nutrient levels, the lowest plant growth rates, and the lowest productivity of any country.  Add to this more recent poor land management practices such as clearance of native vegetation, overgrazing by sheep, cattle, rabbits, soil nutrient exhaustion, soil erosion, misguided government policies and increased urbanisation in prime agricultural areas, no wonder Dick Smith is concerned for the future of Australia and its citizens. Climate change is already affecting the quality and seasonal availability of many foods in Australia; you don’t have to go too far, just ask anyone who makes their living off the land.

The extremely vulnerable nature of the Australian environment and lack of consistent water supply should be a priority at all levels of government as more frequent and intense heatwaves, droughts and extreme weather events will increasingly place stress on food supply and prices. The Climate Council of Australia suggests international competitiveness in many agricultural markets will be challenged by the warming climate and changing weather patterns. They also outline that water scarcity, heat stress and increased climatic variability in our most productive agricultural regions, such as the Murray Darling Basin, are key risks for our food security, economy, and dependent industries and communities. Food security is also a real concern as there is typically less than 30 days’ supply of non-perishable food and less than five days’ supply of perishable food in the supply chain at any one time. Households generally hold only about a 3-5 day supply of food. Such low reserves are vulnerable to natural disasters and disruption to transport from extreme weather.

"Doing all we can to combat climate change comes with numerous benefits, from reducing pollution and associated health care costs to strengthening and diversifying the economy by shifting to renewable energy, among other measures."

I woke at 3:00 am a few days ago to the smell of the bush fires wafting through the house. It was surreal, and from the intensity of the smell it seemed the fires where nearby, the reality was, these fires were raging hundreds of kilometres away. I wondered how people with breathing ailments and asthmatics were coping. Turns out the smoke haze covering parts of NSW and Queensland exceeded air quality indicators for many days. Depending upon ones proximity to the fires, the particulate matter in the air in parts of NSW has been 5 to 20 times higher than the baseline national standard for clean air. At these levels this typically impacts people whom have pre-existing respiratory issues, heart and lung conditions. Depending on the severity and exposure of particulate matter over a prolonged basis (weeks or months) then the impacts could potentially manifest into more serious complications and conditions.

In and around the Port Macquarie area on the Mid North Coast in NSW, home to around 85,000 people, a week of heavy smoke haze and ash has seen the air quality reach hazardous levels. On Friday the region experienced the world's lowest air quality rating with the Environment Department giving Port Macquarie an Air Quality Index (AQI) rating of 1,739. The Air Quality Index (AQI) is a scale of air pollution that helps understand air quality and modify our activities if pollution levels are high. Anything over 200 is considered hazardous and comes with an air pollution health alert. The alert suggests avoiding all outdoor physical activities. The AQI meant Port Macquarie’s air quality rated worse than hotspots like New Delhi and Beijing. Children were being sent home from school because of the health risks.

Having spoken with many people in Northern NSW over recent weeks, the words which keep popping up with residents, old timers, farmers and other observers of the landscape is unheard of and unprecedented. No one has ever seen this area so dry and stark before. If this is the new normal and these warming trends persist, there are going to be serious challenges in food production moving forward. While it is imperative we continue to question, advocate and place pressure on the political system to deal with these issues, we must also remember that our political masters are generally reactive in nature.

Australia is one of the most urbanised countries in the world 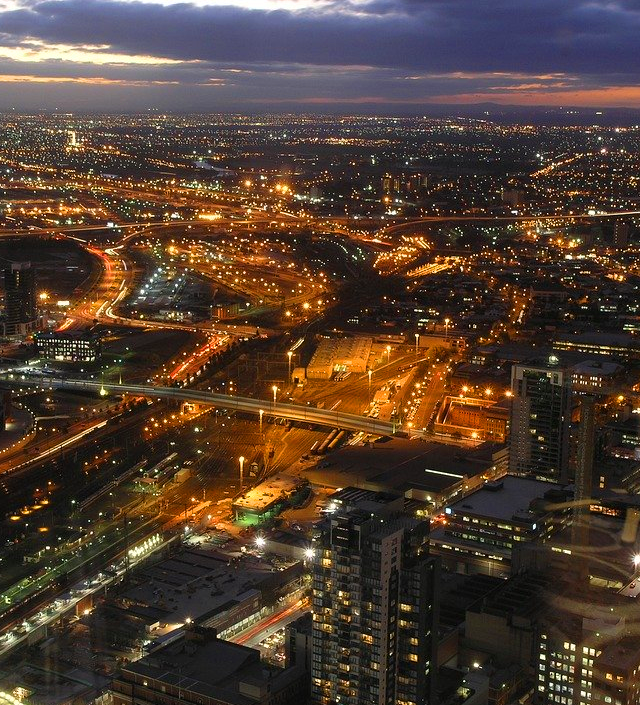 With over 90% of the Australian population living in major cities, Australia is one of the most urbanised countries in the world. These urban conglomerations are almost entirely dependent upon the nearby rural landscapes for their very existence and cheap energy in the form of fossil fuels, mainly oil. It is easy to be complacent about the state of the world and our own backyard when the trucks keep turning up to the supermarkets and we can get our flat white from the local café.  Until it happens in our back yard people are generally complicit in maintaining the status quo and reluctant to push for serious change. It is only by understanding and recognising the challenges and risks can we move to a place of action and engagement.

As we see more and more of these climate events and catastrophes occur the more seriously people will start to question the status quo. It is far easier and less stressful to pre-empt potential disasters than to wait for crisis to occur. Once a crisis occurs it becomes more difficult to coordinate people and resources. It can be overwhelming to make sense of dramatic changes and shifts when access to resources, knowledge and infrastructure are limited. It is better to have strategic preparedness plan than to be caught off guard. Building local, regional and community resilience in light of the looming climate crisis is paramount for moving forward into the 21st century.  While ignorance, self-interest and a business as usual mentality continues to dominate the political narrative, the best thing we can do at a personal level for our families and local communities is to take responsibility for our own future and respond in an empowered, resourceful and intelligent way.