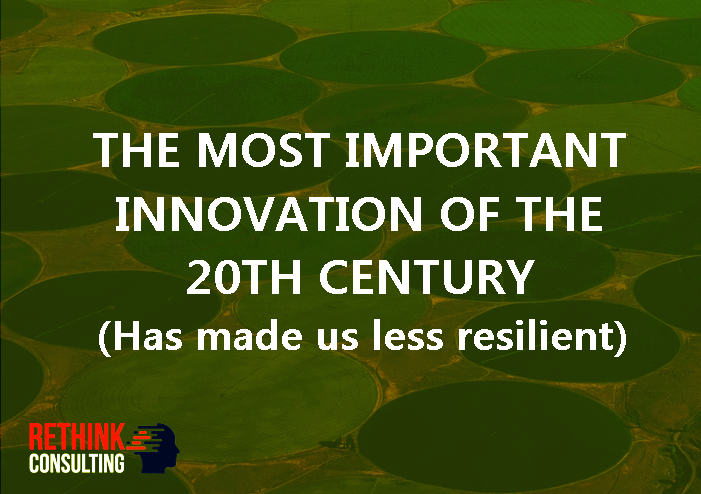 The Most Important Innovation of the 20th Century
(Has Made us Less Resilient!)
Article by: Andrew Martin author of, Rethink... Your World, Your Future and Director of Rethink Consulting

What do you think is the most important inventions of the twentieth century? Among some of the most common answers include, aeroplanes, nuclear energy, space flight, television, computers, the iPhone. Yet none of these come close to matching the impact the synthesis of ammonia from its elements has had on the world. The world might be better off without Facebook, iPhones, Nuclear weapons, Microsoft, CNN, and the latest techno gadgetry as none are critical to human well-being. The world’s population could not have grown from 1.6 billion in the 1900's to today’s seven and a half billion people, without the Haber–Bosch process. Much of the food we eat is grown with some form of synthetic chemical fertilizer derived from the Haber-Bosch process. Due to its dramatic impact on the human ability to grow food, the Haber-Bosch process served as the ‘detonator of the population explosion.’ This is the prognosis of the distinguished Czech-Canadian scientist, policy analyst, professor, and scientist Vaclav Smil. (1)

The early 1900’s saw chemist Fritz Haber and Carl Bosch develop a method of converting nitrogen from the atmosphere. Fertilizer manufacture is an energy-intensive business. It has been estimated that fertilizer production accounts for approximately 1.2% of the world’s energy use, of which about 93% is consumed by nitrogen-based fertilizers.(2) The two raw materials for the reaction are obtained-nitrogen and hydrogen. The major source of hydrogen is  methane from natural gas.  Impurities are removed from the gasses through a process called scrubbing. Once scrubbed, both gasses are mixed, and the mixture is piped into a compressor. Gases are passed over four beds of catalyst, with cooling between each pass so as to maintain a reasonable equilibrium constant. On each pass only about 15% conversion occurs, any unreacted gases are recycled, and eventually an overall conversion of 97% is achieved. Ammonia is collected in tanks as a liquid, and stored under pressure. (3)

The Haber-Bosch Process has Changed Agriculture

The importance of being able to produce ammonia is significant, because ammonia is the building block for nitrogen-containing compounds. Ammonia is used in the production of essentially all nitrogen compounds, and nitrogen in turn is necessary for the manufacture of artificial fertilizers, which provide nutritional support for plant growth. The ability to fix nitrogen used to produce fertilizers allows plant yields to increase, providing food for rapidly growing populations. Hence, food production expanded dramatically during the 20th century. Nearly 80% of the nitrogen found in human tissues originated from this method.(4)

Addicted to the Haber Bosch Process

The Haber process now produces 450 million tonnes of nitrogen fertilizer per year, mostly in the form of anhydrous 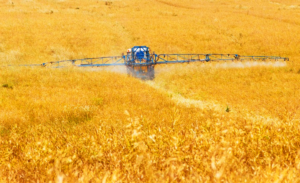 ammonia, ammonia nitrate, and urea. This equates to the consumption of between 3–5% of the world’s natural gas production for this process alone.(5) To understand just how widespread, and how much, artificial fertilizers are used worldwide, we can look at the per kilogram per hectare (of arable land) data from the world bank. Australia uses 44.7 kg per hectare, Brazil 181, Canada 74.4, Chile 358, China 647, Germany 199, Ireland 387, Jordan 1,260, Malaysia 1,570, New Zealand 1,485, Qatar 12,087, UK 234, and the U.S 131 kg per hectare.(6) Typically mass produced crops such as wheat, cotton, corn, soybean, rice, sorghum, coffee, cocoa, citrus, sugar cane, potatoes, sunflowers, fruits and vegetables are the main users of various combinations of artificial fertilizers.

It is not only crops which add to increased use of nitrogen based fertilizers. In dairy and cattle farming nitrogen is used to improve pasture growth. This adds to a vicious circle of excess nitrogen in natural ecosystems. Artificial nitrogen and phosphorous are added to improve crops for intensive farming. Cattle release further nitrogen (contained in urine) as urea which enters waterways. Too much nitrogen (in the form of ammonia or nitrate) is highly toxic to fish and some other aquatic organisms. Both raw sewage and dairy shed effluent are rich in ammonia. The much more common and widespread impact of nutrient pollution – excessive growth of unwanted plants – occurs at lower nitrogen levels. Excessive growth of unwanted plants, such as slime, algae, and choking weeds, degrades swimming and fishing spots and depletes oxygen in the water, sometimes to the point of suffocating aquatic life. (7)

The Problem With Artificial Fertilizers

Like an athlete receiving a shot of steroids to improve performance, artificial fertilizers help plant growth in the short-term. Over the long-term it creates a deadly cycle. It takes hundreds of years to build just inches of quality topsoil. Yet with industrial mono-cropping agriculture nothing is done to build soils for the future. Most of the areas using extensive artificial fertilizers would not be able to produce crops without massive amounts of fertilizers continually being added to support plant growth. Synthetic fertilizers create serious imbalances in the nitrogen cycle and negatively impact soil organisms, and runoff from excessive nitrogen creates dead zones in rivers and oceans.

To a certain extent there are diminishing returns for this synthetic method of farming. In parts of India where the 'Green Revolution' took hold (a combination of  high-yielding varieties of cereal grains, expansion of irrigation infrastructure, modernization of management techniques, distribution of hybridized seeds, and the widespread use of synthetic  fertilizers and pesticides), great results were produced in the short term but parts of India were also decimated and now lie as barren wastelands. As commodities such as oil and gas become harder to acquire and potentially more  expensive, the  cost of synthetic fertilizers will no doubt be impacted. Better for us and the planet to wean ourselves off these before biophysical constraints kick in...

What to Do to Help Build Community Resilience

Article by Andrew Martin, author of  Rethink…Your world, Your future. and One ~ A Survival Guide for the Future…